Rich and I joined one of the eleven groups of independent film makers that participated in the First 48 Hour Film Project. The challenge was to write, shoot, score, and edit a complete short film in 48 hours. Our group has one of the more interesting stories in terms of the filming adventure and as it turns out we also have one of the most talked about films of the series. The film genres were drawn at random and, wouldn’t you know it, we ended up with the Horror genre!!

The opening of our film, Grave Consequences, was shot on location at a Washington Area cemetary. You probably guessed with all the last minute arrangements that no one bothered to get permission to film there. The project was thrown into a tail spin when the crew was kicked out of the location.

But our fearless crew found a new location and invented a film within a film in order to save the project. The result is kind of a horror comedy, but not at the same time. The scary parts are really scary and the funny parts are really funny. Check out Jorge Bernardo’s site for more filming horror stories, happy endings, and complete photo log of the project! A film like this tends to have a life of its own so I’m sure you will hear more about this film someday.

This summer we had a chance to get back to our monster/horror/thriller roots. We performed a new score for Der Golem on August 4 for a packed house at the Washington Jewish Community Center. 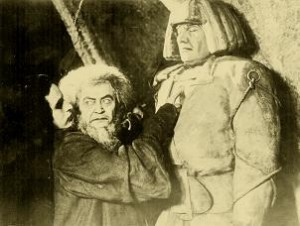 According to legend, the Kabbalist mystic Rabbi Loew breathes life into a man of clay to protect the Jews of Prague, only to lose control of his creation. This story was brought to the screen by German Expressionist directors Paul Wegener and Carl Boese in the 1920 silent film The Golem.

On June 20, 1921, The New York Times reported, “The black magic of the Middle Ages, sorcery, astrology and all the superstitious realities of people so legendary in appearance and manners that the unnatural seems natural among them, have been brought to the screen … in The Golem.” The film is based on the Golem legend that is said to have influenced Mary Shelley’s Frankenstein.

This film has several scenes that call for sacred Jewish music. We used the limited time we had to assimilate some of the beautiful music that has been written for the Kol Nidre prayer. We also listened to a lot of Klezmer music and found a way to incorporate some of the melodic and harmonic elements into our own new music. The film also calls for some Medieval court music, Medieval party music, and plenty of Golem conjuring chase music.

Someday we’ll add some samples of the music and prehaps a few clips to the site….

That’s all for now. See you in the fall…

This entry was posted in News and tagged 48 Hour Film Project, Golem. Bookmark the permalink.