Remember that annoying guy that sat behind you in sixth grade? You know the one that couldn’t stop playing the drum solo from Wipe Out with his fingers on his desk. Well it turns out that some of those guys grew up (at least physically) and have graduated to large metal objects and strange electronic thingies. And guess what? They got pretty good at banging on things and decided to hold a week long convention so they could show off! Naturally we were invited because Rich is a master of the percussive arts and not because he ever banged on table tops. (For the record Rich admits to getting kicked out of science class in the tenth grade for banging on that metal thing under his desk. I rest my case.) 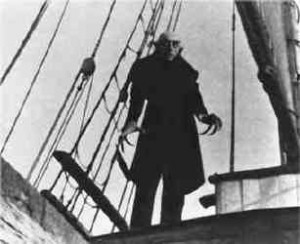 Anyway, that was the long way of saying that Silent Orchestra was one of the featured acts at the Percussive Arts Society International Convention last November. We were part of the opening day event called “Wired for Percussion.” Rich was in the spot light with his electric vibes, samplers and Kat MIDI controller. I just drank lots of coffee and faked it by banging on my keyboards.

All kidding aside, this gig was for us a perfect opportunity to fulfill our lifelong goal of bringing classic silent films to a new audience. The silent film screening was a new experience for most of the younger percussionistas in the audience. Unfortunately they didn’t get the “kids don’t try this at home” message so a small army of recovering desk abusers may try to follow in our footsteps.

The festival was a great experience for both of us. Our favorite performances were Keiko Abe playing marimba at the Ryman auditorium and the monster drum duet of Terry Bozzio and Chad Wackerman (ex Mothers). We also enjoyed the electronic adventures of Joel Dravel and Don Buchla.

To be perfectly honst, we were not sure that people would be ready to be scared on October 31. But our fans came through. Visions, Washington’s grooviest film parlor Bistro and Lounge hosted our live accompaniment to the 1922 F.W. Murnau classic that put us on the map. We performed the score we composed for the Image Entertainment DVD and Kino Video releases that came out in 2001. Our performance was in the larger of their two theaters. But when we sold out the large theater Visions they decided to cancel their first run feature and simulcast out show in the smaller room.

As far as we know this was the first silent film with live accompaniment theatrical simulcast. We are sad to report that Visions closed its doors in 2004 after a difficult battle with larger chains and newer art house theaters. We deeply appreciate everything that Visions did for the local film going community and wish them well in their next endeavor.

Again, this is hearsay, but our sources have reported that the Image netertainment Special Edition DVD is one of the top selling DVD’s of a silent film of all time! Many thanks to David Shepard for inviting us to participate in his ground breaking release of this great classic with not one but two scores. This film has opened many doors for us. We continue to get messages from fans who appreciate the way we updated this film with our contemporary sound.

This entry was posted in News and tagged Nosferatu, PASIC, Visions Theater. Bookmark the permalink.