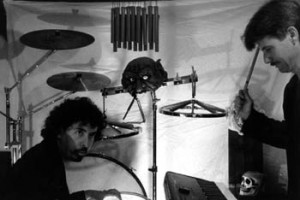 With a passion for experimentation and improvisation, they seamlessly fuse contemporary and traditional idioms to create a new sound for silent films. Silent Orchestra is expanding the art of pre-talkie films through their spontaneous and dynamic live performances and and their state of the art synchronized recordings.

Carlos Garza is a composer, sound designer and music editor for film and video. He has scored 15 feature films and more than 20 shorts and animations. In 2009, he was awarded the top composing prize in the Washington, DC 48 Hour Film Project for his work in “Star Pupil.”

He is known for live accompaniment of classic and contemporary silent films in the duo, Silent Orchestra with Rich O’Meara. Together they created a new sound for classic motion pictures by directors, such as F.W. Murnau, Marcel L’Herbier, Charles Bryant, Nell Shipman, Ray Smallwood and Georges Méliès. Silent Orchestra received critical aclaim for their surround scores for the Nosferatu (1922) and Salomé (1923) DVDs from Image Entertainment.

He contributed to the soundtrack for, Thirteen with Cecil Hooker (violin) and Shep Williams (keyboards). The feature, directed by David Williams, was shown at worldwide film festivals and received a jury award at the 48th Berlin International Film Festival. He is currently writing music for more “talkie” films, including an action feature with international locations and a 35mm short.

Rich O’Meara is fluent in a wide variety of musical styles. As a member of One Earth Percussion Theatre, with Joseph McIntyre and Michael Wingo, he took part in innovative multi-media performances. He has performed with the Contemporary Music Forum, the Lenox Ensemble, and the New York based Sky Music. He was featured as marimba soloist with the Women Composers Orchestra and under the direction of Michel Camilo, was a guest artist at the 1998 Latin-Caribbean Festival at the Kennedy Center. With the new music ensemble Amaranth, he premiered Puzzle Piece for three marimbas.