Our second album, “Poe – A Dream Within A Dream” releases on April 16, 2021 exclusively on Bandcamp. Available as 24-bit, 48kHz download and limited-edition CD. These instrumental tracks, composed by Carlos Garza and Rich O’Meara, were inspired by the works of Edgar Allan Poe. We were joined by some of the finest musicians in the world, who generously lent their talents to our creative vision. The album was completed in the age of the pandemic and the session musicians collaborated from the safety of their home recording studios. Check out these stellar reviews!

Our debut album, “Nosferatu, A Symphony of Horror” is available for streaming and download at Bandcamp. Our primary goal was to portray the intentions of the film in a way that rings true for the modern audience. While we enjoy classic film music, sometimes a contemporary approach captures the intended mood in a way that better resonates with today’s film audience. We drew upon a broad spectrum of film music as inspiration for our score. We looked at many of the great films that were made after Murnau died. Would he have worked with Hugo Friedhofer, or Franz Waxman? What might those collaborations have sounded like? 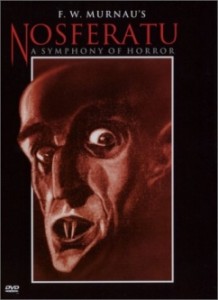 The top selling Silent DVD of the Ultimate Vampire Film.

This DVD, from Image Entertainment and Film Preservation Associates, is unfortunately out of print. Our score is available for licensing.

“The real revelation of Image’s new transfer, though, is the spectacular score written and performed by The Silent Orchestra. The score is filled with beautiful melodies that perfectly reflect the action. It’s innovative and imaginative, and greatly enhances the experience of watching the film without distracting from it. I can honestly say that it was like seeing the film for the first time. Added to the score’s effectiveness is the perfect, lush 5.0 recording that includes some very interesting surround effects. “
– Fred Hunter on Nosferatu: The Classics on DVD

Our second DVD from Image Entertainment and Film Preservation Associates is unfortunately out of print. Our score is available for licensing.

“A little more than a year ago, in the auditorium of the National Gallery of Art’s East Building, the duo Silent Orchestra was anything but as they provided a stirring and remarkable soundtrack to the screening of the 1923 silent film ‘Salome.’ Carlos Garza and Rich O’Meara followed it that evening with another moving score to the 1921 movie ‘Camille.’ The combination of the contemporary, artful score and such early-20th-century film work left me eager to hear what Silent Orchestra would do with other movies from the pre-talkie era.”
– Eric Brace, The Washington Post