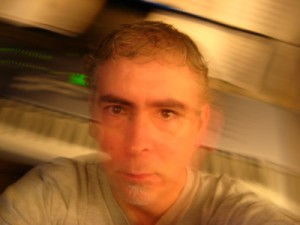 Carlos Garza has scored 14 feature length films and over 20 short films. He was recently awarded the top composing prize in the Washington DC 48 Hour Film Competition for his work in “Star Pupil.”

Carlos Garza began his film scoring career in 1997, when he scored the feature film, Thirteen, with Cecil Hooker and Shep Williams. On the strength of critical response at the 1998 Toronto International Film Festival, the film was invited to the 48th Berlin Film Festival, where it was awarded a jury prize.

Jazzed at the possibilities of film scoring, he began accompanying classic silent films at the National Museum of Women in the Arts in Washington, DC. He usually performed behind the screen, which meant watching the film backwards in almost complete darkness! This turned out to be good practice for his next gig with the duo, Silent Orchestra. Together with Rich O’Meara, he created a new sound for classic silent films by directors, such as F.W. Murnau, Marcel L’Herbier, Charles Bryant, Nell Shipman and Ray Smallwood.

Silent Orchestra has appeared seven times at the National Gallery of Art and performed at film festivals and the AFI Silver Theater in Silver Spring, Maryland, where their Nosferatu (1922) show has become an annual Halloween event. Their 2001 DVD of Nosferatu with surround score is one of the highest selling DVDs of a classic silent film and their score has been used on Turner Classic Movies. Their 2003 release of the 1923 film, Salome has earned critical acclaim.

Carlos Garza has performed rock, jazz, R&B, country, comedy and film music in the Washington area since 1979. As a founding member of The Young Professionals, he was an integral part of the legendary new wave scene at the 9:30 Club in the early 1980’s. In the late 80’s he led the alternative pop group Danse of Guilt to critical acclaim and numerous songwriting awards.

He has performed contemporary jazz with the Bruce Middle Group and appears on the 1990 release Far and Beyond. He performed, recorded with and co-wrote with Grammy award winning pop singer Margot Chapman (Starland Vocal Band). He performed original compositions and improvisations at weekly shows by the comedy troupe Gross National Product. His music has also appeared on their PBS broadcasts.

He has judged the Mid-Atlantic Song Contest and been a judge in an East Coast state music grant competition. As owner and operator of Pepperland Recording, he has engineered releases for CD and DVD. As a producer, he has crafted many song demos for aspiring pop, folk, and country songwriters. He studied music theory at Frostburg State University and jazz piano with Wade Beach and Burnett Thompson.