Murnau Films at the National Gallery of Art 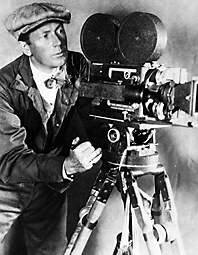 October of 2004 was a very busy month for us as we prepared music for screenings of three films by FW Murnau at the National Gallery of Art. The weekend got off to a great start with a “critic’s pick” in the Washington Post Weekend section and a fabulous write-up by Washington Post critic Desson Thomson.Faust (1926) is based on the well known Germanic tale and was Murnau’s last film for UFA. At almost 2 hours in length, this was our most complex and challenging score to date. Next up was the 1924 film, The Last Laugh, which had the audience in stitches for the dramatic plot changes in the last reel.

Although we’ve played Nosferatu on many occasions, it was a very special playing it for the diverse standing-room-only crowd at the Gallery.

We played for a capacity crowd of about 1200 students and festival attendees at the 2003 Savannah Film Festival. The festival is sponsored by the film department of the Savannah College of Art and Design (SCAD) and our sponsors included distinguished professors of the Sound Design Department. We shared a discussion panel on sound design with Dane Davis, sound designer for the Matrix films and were invited to host a class in sound design, which was not part of the festival.