French Films at the National Gallery of Art 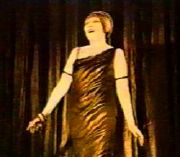 We made our return to the National Gallery of Art in January with two films by Marcel L’Herbier. It was sponsored in part by the French Embassy and culminated in a rousing ovation for our accompaniment to L’Inhumaine.

L’Homme du Large (1920) is a dramatic tale of one family’s struggles for identity in a small fishing village. L’Inhumaine (1924) was the last Impressionist film produced in France and features some outlandish sets and an equally hyperbolic script. The story revolves around a singer named Claire and her would-be suitors. It’s a whirling mix of drama, musical, science fiction and mystery. As usual, our scores were mostly new compositions and a bit of improvisation to keep it spontaneous.

L’Inhumaine was the perfect opportunity to work with a guest musician. Susan Lowell is a singer/songwriter and multi-instrumentalist with a background in jazz, blues, folk, world and musical theater. We made use of her versatility as both a singer and percussionist throughout the film. While her subtle vocalizing and percussive effects added a new dimension to our sound, it was her featured vocals that brought the audience to its feet. We look forward to working with her again.

Salomé is now out on DVD

This Spring also found us back at work with the team from Visions Theater for yet another 48 Hour Film competition . By definition, the films must be started and completed in 48 hours. Each installment has slightly different requirements but there is always a required prop and a required line that must be in the film. Our genre this time was romantic. We again inlisted the vocal and compositional talents of Susan Lowell and had a great time.